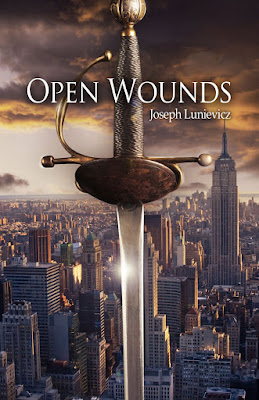 (click to enlarge)
I just finished reading Open Wounds the other day. I've been aching to talk about it ever since, but with the holiday and other blogging things scheduled, I had to bite my tongue and wait. Before I get to my thoughts let me give you the jacket copy:

Cid Wymann, a scrappy kid fighting to survive a harsh upbringing in Queens, NY, is a almost a prisoner in his own home. His only escape is sneaking to Times Square to see Errol Flynn movies full of swordplay and duels. He s determined to become a great fencer, but after his family disintegrates, Cid spends five years at an orphanage until his injured war-veteran cousin Lefty arrives from England to claim him. Lefty teaches Cid about acting and stage combat, especially fencing, and introduces him to Nikolai Varvarinski, a brilliant drunken Russian fencing master who trains Cid. By 16, Cid learns to channel his aggression through the harsh discipline of the blade, eventually taking on enemies old and new as he perfects his skills. Evocative of The Book Thief with a dash of Gangs of New York, Open Wounds is the page-turning story of a lost boy's quest to become a man.

Anyway, I found out about Joe and Open Wounds when I interviewed Andrew Smith a few months ago. I asked him something like "who is the best writer you've discovered in just the past year?" He answered, without hesitation, Joe Lunievicz. Andrew said:

Joe Lunievicz. Seriously. Joe contacted me and asked if I’d be interested in reading his forthcoming debut, Open Wounds. I totally love that book. It’s heroic, moving, and exciting. I can’t wait to see it in print.

Now that time has come (Open Wounds was released on May 25th) and I have to say I couldn't agree more. If you know me well, you know that I have a sort of long-standing inside joke that I sometimes leave in blog comments, for no one's amusement but my own. If one of my lovely female friends reviews a book that sounds a little too girly for me, I'll ask in the comments whether it has any sword fights. I'm sure no one gets it, or they just think I'm being a dick, but the point I'm trying to make is: I'm a man, I love reading great books full of beautiful writing, but I also need a little action from time to time (when I'm reading, sheesh).

It's a stupid joke, I know, but I'm a stupid guy, and the point is that I care about YA books that will appeal to boys, young men, and grown men who are still teenagers, mentally and emotionally. Anyway, before I go on about myself for any longer, my point is that this book is just that.

Yes, I realize the obvious thing is that much of the plot is based around fencing, which obviously means the book is FULL of sword fights. And that's great, it certainly appealed to me when I first heard about the book, because even though I use the comment as a joke/metaphor for what I care about in books, I DO actually love swords, and I even was in the fencing club for two years in high school. I know, nerd alert, but I'm not ashamed.

Yet, after reading Open Wounds, I discovered that it is so much more than a great manly action book full of duels, honor, and great sword fights. It is a devastatingly human tale of suffering, loss, doubt, pain, fear, and ultimately: redemption.

I could go on for a long time about what makes this book so incredible, but this is only a blog post, so I'll just point out the two biggest things for me.

First was the setting. This is a historical YA novel, that takes place in NYC (specifically Queens, in the 1930s, and then Manhattan, in the 1940s) and the way that Joe portrayed this place absolutely made it come alive. I've read some articles about how much work Joe did researching the little things (like the New York Subway system as it existed at the time), and it probably helps that Joe lives in NYC, but even that doesn't explain the vibrancy with which he breathes life into this setting. You'll notice what I mean immediately if you decide to read this book.

The seconds was the characters. There are several beautifully flawed characters in this novel, and what makes them great is that not a single one of them is perfect. They all make mistakes and they all pay for them, but there is one character in particular whose story is so heart-rendingly poignant that it will leave you gasping. I'm not going to go into who or why, because to do so would be to ruin it for you all, but I will say that there was something so realistic, so authentic and so disturbingly believable about this character that I don't know if I've ever read a more compelling portrayal of a human being.

And now we come to the point where I've gone on for far too long. Before I let you go, though, let me point you to a few excellent resources regarding Joe and his debut novel:

Joe's blog section of his website, where he talks about and shows photos of the book production/manufacturing process (I wanted to discuss the amazing design of this book and its cover, but I ran out of room).

Joe's website, with a few quotes of what people are saying about Open Wounds.

A guest post by Joe, for Cheryl Rainfield, author of Scars, where he talks a bit about Open Wounds and great first lines.

And here are some places you can get Open Wounds:

IndieBound
GoodReads
Powells
Amazon
Posted by Matthew MacNish at 4:01 AM