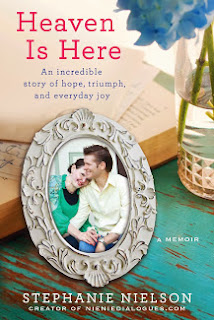 Sometimes you close the book and know that reading it has changed you. Sometimes you know half-way through. In the case of Heaven is Here, I felt drawn to the story before I even saw the book. Through my sister's word-of-mouth review, and a video I had seen on the internet about Stephanie and Christian wanting to name their first child Claire because it was the name both of them had loved as children, they felt like old friends to me already. I had heard about the plane crash that left Stephanie with scars and pain she struggled to live with. My empathy was piqued as much as my curiosity.

My family was in a small plane crash when I was two, but we were blessed to get out before the inferno that always follows the crash. The pilot lost his life, and that was very sad, but I was two when it happened and all I knew was my own experience. The saddest thing that happened to me personally was that all our Christmas presents from grandma and grandpa went up in flames. Kind people worked to make that up to us in the months after the crash. Only my older brothers and parents had emotional trauma from the crash. We did not have an experience anything like Stephanie's, and yet I felt a deep empathy for her that went beyond the ordinary. Perhaps it is her beautiful voice in writing, the mix of romanticism and realism that doesn't sugarcoat things but ends up tasting sweet all the same. Perhaps it is the places she wrote about: Falcon Field airport, and Mesa, my old stomping grounds; Provo, Utah and the Y, my alma mater. Perhaps it is that we share the same faith in The Church of Jesus Christ of Latter-day Saints, and the familiarity I felt throughout the story because of these things. But I think more than anything else, what I felt and why I felt it was triggered by Stephanie's remarkable and admirable passion for motherhood. From the beginning of her life story, she loves the idea of being a mother. And even when the reality of pregnancy includes vomiting while she makes dinner for her beloved husband, she somehow fulfills her favorite role with equanimity and patience. She never complains about the role of mother or wife, and only laments in the later chapters that she cannot fulfill the functions of motherhood, due to her injuries, to her satisfaction. This personal view she holds, glorifying motherhood and marriage, struck me in its uniqueness in the world of women's narratives. So much has been written about the plight of women, and it was refreshing to hear the voice of one who loved everything about her womanhood, especially that aspect of femininity that allowed her to be a wife and mother! Coming from where I do, having walked the long road to motherhood and resenting something about it all the while, whether it was the actual work or simply the way the world looked at us as mothers, I drank Stephanie's message about family like it was pure, spring water on a hot summer day. A few times my learned cynicism asked itself, Is she for real? But always came the feeling that yes, this was the most earnest narrative I had ever read. In a most fundamental way, with all we shared in common, Stephanie of the NieNie Dialogues, was different from me. We were different kinds of women. Her childhood and parentage had prepared her for a different kind of life, and besides that, there seemed to be something inherent to her beautiful soul that prepared her for a life mission centered around family.

I found that I envied her.

And then the incredible journey of recovery began in Part 2, and envy receded in shame. She doesn't want my pity; that's clear from her narrative. But whose heart could be untouched in the face of so much internal and external suffering? I can tell you, there was much private sobbing throughout the night as I read, and I only stopped reading four or five times, to help a wakeful child find sleep again.

How did Stephanie's story change me?

It taught me more deeply of the intrinsic connection between all of us, the people healing and the people serving; mothers and fathers and children; sisters and brothers and cousins and neighbors; doctors and patients and nurses; grocery store clerks and flight instructors and song-writers. None of us is as individual as we like to believe. And why do we want to believe it, when the connection we share is truly more beautiful and meaningful than any pretended self-reliance could ever be?

Connection, purpose, faith, and joy are all at the center of Heaven is Here.

For more about Stephanie and Christian, read her blog, http://www.nieniedialogues.com or watch videos at the same website. Her book is a New York Times bestseller and she has been featured on The Oprah Winfrey show, celebrating her indomitable spirit and dedication to motherhood.
Thank you, Stephanie Nielson.