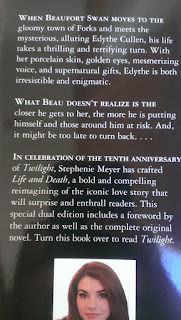 This is why I love Stephenie Meyer! Her publisher contacts her and asks for a letter to put in the front of the 10th Anniversary Edition of Twilight. She says, That sounds boring. How about I rewrite Twilight, switching everybody's gender?

Seriously, there are few authors so in touch with their fan base. From the apology in the front to the afterword in the back, she talks to fans like we're part of her family. (The apology is that this is not Midnight Sun, the much-hoped-for, unpublished volume of The Twilight Saga that tells the story from Edward's point of view. When that comes out, look for my Afterglow Review because I have already read a portion of it on her website and plan to love the whole thing!)

First of all, I encountered this re-imagined version of Twilight in Wal-Mart, of all places, while grocery shopping with my family. I picked it up, saw that it was not some spoof but an actual re-imagining by the author herself, and immediately started chuckling like a giddy schoolgirl. My oldest son, who has aged seven years since I first read The Twilight Saga, asked what was so funny. All I could say: "I'm just tickled."

Twilight came into my life when I was a brand new mom, living in a California apartment, and trying to figure it all out: how to balance my love of writing and reading with my new mom job. Stephenie Meyer became my hero when she showed me it could be done, and it could be fun. Shortly--very shortly--after reading her books, I began writing my own books again.

You can imagine, then, that I picked up Life and Death with the intention of enjoying it, and I thoroughly did!

On Monday, October 26, my more scholarly write-up on this latest book will be up on Operation Awesome. Here, I intend to gush, so get ready.

I loved Beau and Edythe! I loved the way Beau made even more sense than Bella, and that Edythe was more Edward than Edward! From Edythe's calligraphic writing and love of classical music and her perfumed breath to Beau's clumsy height and gait and his tough-guy act and his wooziness from the smell of blood, they just clicked as characters. I can imagine that if I had never read Twilight, Life and Death would have been a hit on its own merits.

All the elements of the story that I loved are there:

Beyond that, the chance to play with gender roles and gender stereotypes is one not to be missed! Alpha werewolves that run in a matriarchal line? A Carine Cullen (the female counterpart of Carlyle) who is the father, so to speak, of the family? And Edythe, an incredible, musical, beautiful, hauntingly perceptive woman who happens to fall in love with her kryptonite: Beau. It's a delightful way to revisit our beloved Forks.

Of course there were parts of the story that had to be altered because they wouldn't quite make sense with a man: biology mostly, but a few stereotypes. For instance, Beau didn't ever do ballet. He ducks into the men's room, not the ladies'. The attack on him in Port Angeles has more of a motive than simply being an easy target (and she sets that up early). But what's amazing is how much of the story didn't need to be altered at all, and it just works.

My favorite scene in this version was the blood-typing fiasco in Biology and the aftermath. Beau's way of dealing with his embarrassment is just so endearing and different from Bella. In fact, Beau's voice, for me, was more fun to read. I hope Stephenie Meyer will consider writing first person from a male perspective more in the future. From what I've read of Midnight Sun and Life and Death, she can more than handle it.

Have you read Twilight? How about this version? Let me know your thoughts in the comments.