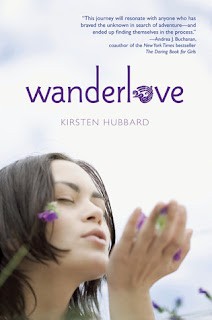 It all begins with a stupid question:

Are you a Global Vagabond?

No, but 18-year-old Bria Sandoval wants to be. In a quest for independence, her neglected art, and no-strings-attached hookups, she signs up for a guided tour of Central America—the wrong one. Middle-aged tourists with fanny packs are hardly the key to self-rediscovery. When Bria meets Rowan, devoted backpacker and dive instructor, and his outspokenly humanitarian sister Starling, she seizes the chance to ditch her group and join them off the beaten path.

Bria's a good girl trying to go bad. Rowan's a bad boy trying to stay good. As they travel across a panorama of Mayan villages, remote Belizean islands, and hostels plagued with jungle beasties, they discover what they've got in common: both seek to leave behind the old versions of themselves. And the secret to escaping the past, Rowan’s found, is to keep moving forward.

But Bria comes to realize she can't run forever, no matter what Rowan says. If she ever wants the courage to fall for someone worthwhile, she has to start looking back.

Kirsten Hubbard lends her artistry to this ultimate backpacker novel, weaving her drawings into the text. Her career as a travel writer and her experiences as a real-life vagabond backpacking Central America are deeply seeded in this inspiring story.

Ok, I'll be honest. I'm not much of a traveler. As a Sagittarius, I've always read my horoscopes about what a natural traveler I am. It's why horoscopes don't hold much stock for me.

IF I were a traveler, I'd be exactly like Bria. Which is why I love this book so much. She's trying soooo hard to be a backpacker. She wants it so bad. She wants to take risks. She wants to forgot the loser boyfriend back home. But she just can't break her true nature. She just can't be who she's not.

In the end, it's the experience of traveling that changes her. She learns from it, and she doesn't have to be someone else.


Disclaimer: This review is cross-posted on my personal blog.
Posted by Kristine Asselin at 2:40 PM 3 comments:

The Winds of Khalakovo, by Bradley P. Beaulieu 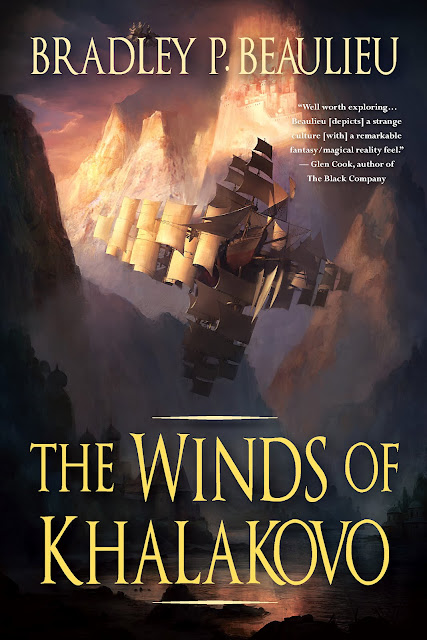 I started reading the paperback I bought at World Fantasy Convention 2011, but I soon switched to Kindle, when that edition was offered up for free (as a promotion, not the author's gift to me for review). In the interest of full disclosure, I will also point out that I know Brad, a little. I met him at WFC because we have some mutual friends, and I first fell in love with his writing after hearing him read from the sequel to this novel.

Now, all that being said, none of it affected my enjoyment of this book, which is one of the best fantasy debuts I've ever come across. Before I share my take, let me give you the blurb, from Amazon:

Among inhospitable and unforgiving seas stands Khalakovo, a mountainous archipelago of seven islands, its prominent eyrie stretching a thousand feet into the sky. Serviced by windships bearing goods and dignitaries, Khalakovo's eyrie stands at the crossroads of world trade. But all is not well in Khalakovo. Conflict has erupted between the ruling Landed, the indigenous Aramahn, and the fanatical Maharraht, and a wasting disease has grown rampant over the past decade. Now, Khalakovo is to play host to the Nine Dukes, a meeting which will weigh heavily upon Khalakovo's future.

When an elemental spirit attacks an incoming windship, murdering the Grand Duke and his retinue, Prince Nikandr, heir to the scepter of Khalakovo, is tasked with finding the child prodigy believed to be behind the summoning. However, Nikandr discovers that the boy is an autistic savant who may hold the key to lifting the blight that has been sweeping the islands. Can the Dukes, thirsty for revenge, be held at bay? Can Khalakovo be saved? The elusive answer drifts upon the Winds of Khalakovo...

Now, I have to say, it's been about two weeks since I finished this book, and I needed that time, because it was a lot to absorb. I was a huge fan of epic fantasy when I was young--Tolkien was my first love, but authors like Eddings, Jordan, Brooks and others filled my shelves as a teen--but of late I've read very little of it. George Martin is really the only fantasy I've read this decade, and I can't even call A Song of Ice and Fire, High or True Fantasy (not that I mean that as a slight, George's books are phenomenal, just very untraditional, in a good way). Bradley's book is incredibly similar in its inability to fit into a tidy little box.

There were some things that struck me about this novel as the levels through which I was introduced to it expanded.
If I had to make one complaint, it would be that the pacing dragged a bit for me in the middle third. However, I suspect this was only due to the fact that I'd been reading so many 60,000 word YA novels lately, and I doubt that most fantasy readers would take issue. People who read a lot of high fantasy understand that a world this rich takes time to build, and you can't just dump it all on the reader. Regardless, the final third of the novel made it all worth it. There were almost sort of two separate climactic moments, both of which I thought were done very well and I thoroughly enjoyed.

I would recommend this novel for anyone who enjoys fantasy, but also for anyone who is looking for something truly new and unique. Before I let you go, allow me to point you to a few places you can find Brad on the web, and read some other opinions on this book:

That's it for today. Happy Tuesday, everyone!
Posted by Matthew MacNish at 3:00 AM 22 comments: