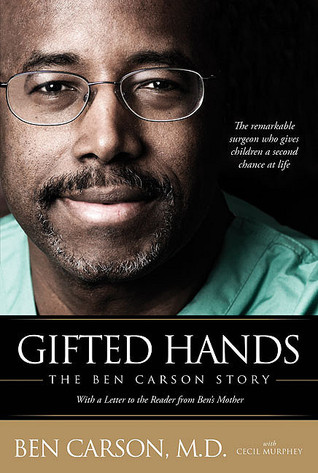 From the first time I saw the movie based on Ben Carson's life, I wanted to learn more about this man and the amazing transition he went through, from a kid from the ghetto's of Detroit to one of the most famous neurosurgeon's in the United States.  This book is filled with amazing stories that not only turned Dr. Carson into the man he is today, but also into a man of God.  Starting from when he was a kid in school with a massive temper problem to performing unheard of surgeries, Dr. Carson could see the hand of God in everything that he did.  This book lists just a few of what I'm sure represent the many times where Divine Providence has shone down on this man to guide him in the ways he should go.

Dr. Ben Carson is known around the world for breakthroughs in neurosurgery that have brought hope where no hope existed.  In Gifted Hands, he tells of his inspiring odyssey from his childhood in inner-city Detroit to his position as director of pediatric neurosurgery at John Hopkins Medical Institutions at age thirty-three.  Taking you into the operating room where he has saved countless lives, Ben Carson is a role model for anyone who attempts the seemingly impossible.  Filled with fascinating case histories, this bestselling book tells the dramatic and intimate story of Ben Carson's struggle to beat the odds - and of the faith and genius that make him one of today's greater life-givers.

I loved the aspects of Dr. Carson's life that he spends so much time talking about.  First, the parts about how much his mother invested in her children.  Even though she herself didn't have much education, she did what she could to make sure her children were learning and smart, even if that meant the heartache of only letting her children watch three television shows per week.  But because of this, her boys grew to love learning and became very successful in their lives. Second, Dr. Carson spent much of his adult life leaning on God to get him through the hard times.  It all started when he was a young boy with a temper problem, and continued to when he was in college wondering if he would ever be good enough to become a doctor, to trying to figure out the best way to perform a surgery to save a young child's life.  This is an amazing story of his life, his trials and how we can all get through these trials if we know whom to depend on.